Here we go: my first photographic story after my return to blogging!

In January of 2018, we headed to one of our favourite safari destinations: The Kgalagadi Transfrontier Park. This is where a great deal of our time in the bush is spent, and we have been making a tradition of returning every summer for the past few years.

This specific sighting unfolded in the perennial Auob riverbed, not too far south of the Mata-Mata campsite. After spending the better part of the morning with a large pride of lions who had occupied the Craig Lockhart waterhole, we came across this sight: 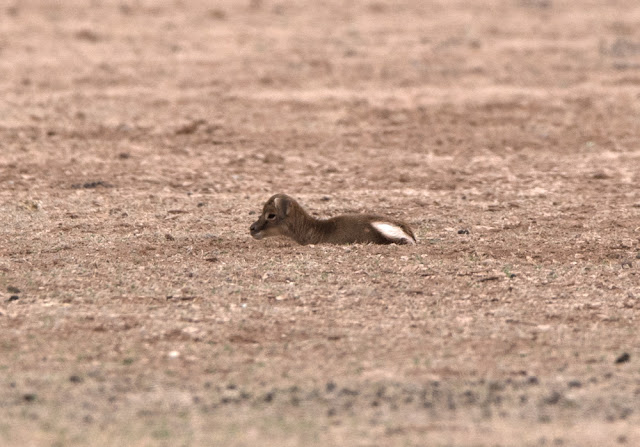 A springbok ewe had given birth, one of the first fawns dropping in this year's summer! Still frail and weak, the fawn was not able to get up yet. The mother was grazing close by, and eventually moved in closer to give some encouragement to get up. My little daughter of nearly 7 years old, who was in the vehicle with us, was very excited by seeing this for the very first time. 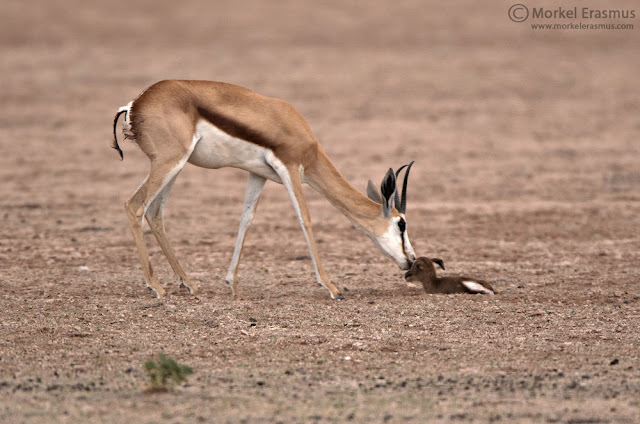 The little fawn did not even seem to want to try to get up. There were a couple of black-backed jackals milling about, and they are very opportunistic, eager to grab any easy meal. The next few minutes would determine whether this little springbok had a chance to live.

Mom would meander away and graze to divert attention away from the fawn when she saw the jackals watching from a distance. Every so often she would return to try and nudge it into action. 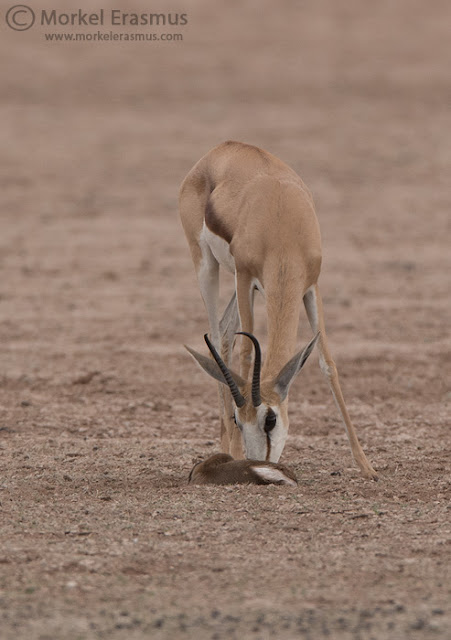 It did not take long for the jackals to notice that the little fawn was not making much effort to get up and start walking...and so the game of cat and mouse began...

The first jackal approached from behind the mother, and she turned to face him!

She was not going to let these scoundrels take her baby without a valiant fight...

The jackals were very sneaky, though, and it was apparent that they had a strategy to "outfox" (excuse the pun) the mother of the little one. While she was fending off once jackal, another would come from behind and grab the fawn. 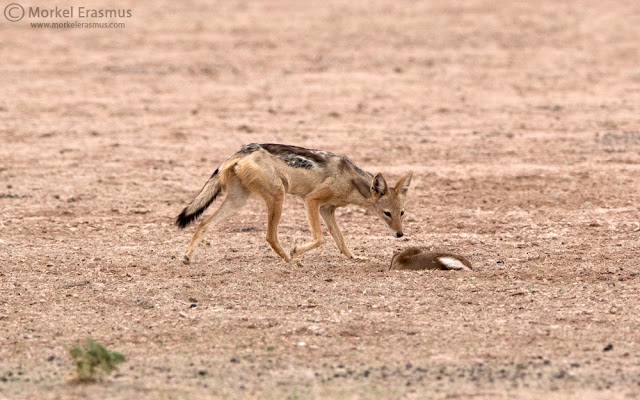 But mom was doing her best to fight for her little fawn. She charged in again, and forced this jackal to also drop his bounty and scoot away...

The drama kept unfolding. With mom's attention now on the newest attacker, another subversive scavenger could sneak in from a different angle and try its luck... 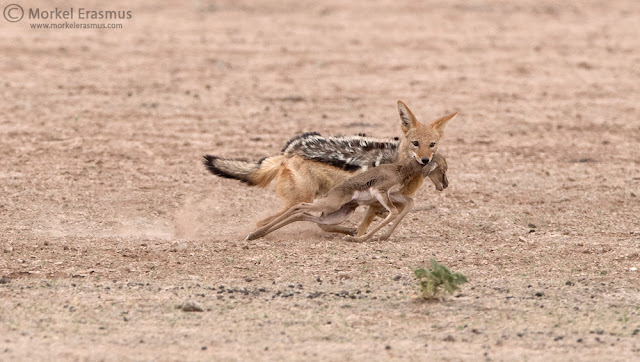 Mom noticed, and gave a valiant chase...but alas, this was the end of the line. Just as she was catching up on the newest thief, the jackal dove into a thorny shrub to start consuming his prize. We surmised the fawn had succumbed at the bite of the first jackal already. 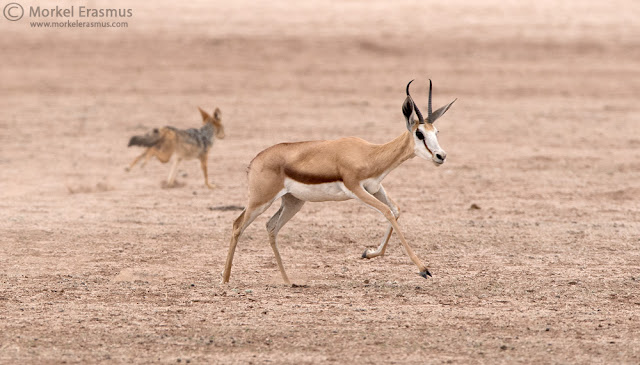 Needless to say the vehicle was silent for a while, and then my daughter burst into tears. She is not a fan of black-backed jackals to this day!

Let me know what you think. Not the nicest story, but part of the drama of being on safari for sure.

Morkel Erasmus
Posted by Unknown at 01:03 4 comments: Links to this post

I am back on my blog

Well, hello friends.
It's been a while.
And by that, I mean it's been almost 18 months since my last post on here.

Due to personal changes in my life I had just been unable to process any photos, write any blogs or engage meaningfully with my photography for the past 2 years. The main reason has been me studying towards an MBA and focusing on my career (which is not full-time photography, surprisingly). The level of effort required to do well in an MBA while carrying on your normal work and raising a family, combined with the amount of screen-time I was having, resulted in me using the free/spare time I did have for relaxation, family-time or sleeping!

I am on the back-end now. A few more months and this season will be behind me. How do they say? The only constant in life, is change.

My photography has not totally stagnated, though. I have been able to sneak away to a couple of short trips to the Kruger National Park and the Kgalagadi Transfrontier Park, as I am accustomed to doing for my normal family vacation safaris. I had to put on hold any hospitality services and photographic guiding, and hope to be able to rekindle that in the near future.

For now - rest assured that I will be rekindling my love of telling wildlife stories, sharing photographic knowledge and engaging in meaningful conservation conversations both here on my blog and on my various social media channels. You would have noticed a spike in my activity on Instagram and Facebook over the last week or two as well.


Here's to more photography, and getting back to doing the things we love! 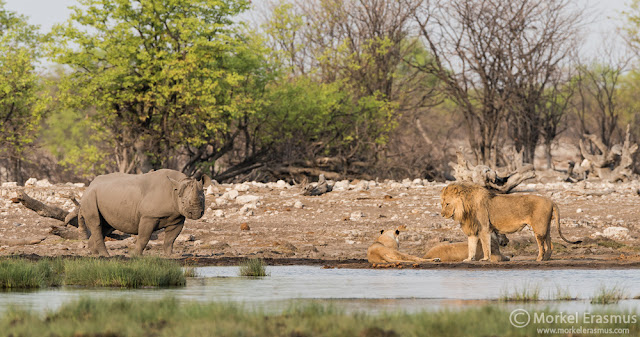 Email ThisBlogThis!Share to TwitterShare to FacebookShare to Pinterest
Labels: back into it, Photography, return 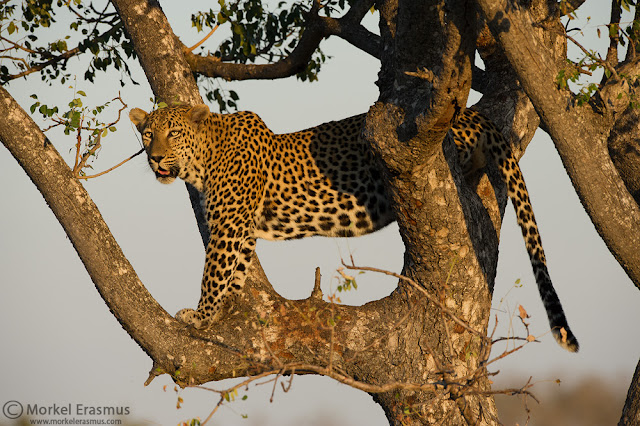 Morkel Erasmus
Posted by Unknown at 18:27 4 comments: Links to this post

During my (relatively short, I might add) lifetime I have had the privilege of visiting the majority of South Africa’s national parks and game reserves. What a wealth of natural heritage we possess!

When people from abroad look at some of the work in my photographic portfolio, they are amazed at the diversity of wildlife and landscapes that we have 'on our doorstep', so to speak. We need to appreciate it, conserve it and foster a love for this natural heritage among all South Africans from all walks of life.

If we don’t, we might just lose it before our children have the chance to see what we see now. Many iconic species of fauna are already at risk (think rhinos and wild dogs), and the constant threat of mining and industrial development in areas of pristine natural beauty is something that won’t go away soon.

Here are some scenes from a couple of well-known and lesser-known parks and reserves that are both accessible for people who self-drive and self-cater, and reasonably affordable.

Everybody’s favourite reserve, this park spans a massive 2-million hectares (approximately) and contains beautiful scenery and fauna. The southern region is very popular and therefore can get very crowded. I prefer to visit the quieter and more scenic northern regions - and if you search my blog you will find numerous posts about my forays in to this iconic national park.


If you are a keen wildlife photographer there is no better place, in my opinion, than the Kgalagadi. Remote, arid and teeming with life, this is a place where silence and serenity seep into your soul. This park is situated in the Kalahari desert, with wide open spaces and red soil.


My blog archives have extensive posts and images from this place, as it's a favourite of mine.

The jewel of the Eastern Free State, this park encompasses iconic sandstone formations, the Maluti Mountains, and a wide array of life forms like zebras, black wildebeest, many birds and small mammals, reptiles and insects.

This relatively unknown gem is a wonderful place to experience the Karoo as it once was - recent re-introduction of cheetahs and lions has made for an even bigger drawing card. It's got amazing backdrops and vistas, and the sense of space and solitude that is so typical of the Karoo.

Sporting the Big 5 (Big 7 if you count the great white shark and the Southern right wale in the ocean section), in a malaria free zone and close to the Port Elizabeth airport, this is a popular destination for people visiting the Cape area and wanting to add a wildlife experience.

Though this park doesn’t fall under the mantle of the South African National Parks, it’s sometimes called a national park and is a very popular destination for nature lovers close to Gauteng.  Besides hosting the Big 5, the Mankwe Dam, with its large bird hide, is popular among birders and bird photographers.

I hope that this quick overview has inspired you to visit more of the well-known and lesser-known wilderness areas left in our country. Get out, explore, photograph, conserve, and communicate!