We carried on and turned off on the Red Rocks loop. Shortly after turning onto this dirt road, we were rewarded with a lovely sighting of 2 rare and shy Sharpe's Grysbok in the process of courtship! They suddenly became edgy and froze. I could hear the alarm call of vervet monkeys down in the riverbed behind them. I was sure there was a leopard walking down there, but there just wasn't anywhere in the vicinity where I could get a view down into the riverbed!! Aaarg!

A bateleur shaking off his spiderwebs...

We also found a troop of Chacma Baboons who had a bunch of rowdy young folks...

As we came to a viewing point over the river, we had a special sighting of a small member of the animal kingdom often overlooked. A female Tree Squirrel was carrying her baby in her mouth over a thick branch at a precarious height. I'd never seen this before, check it out! 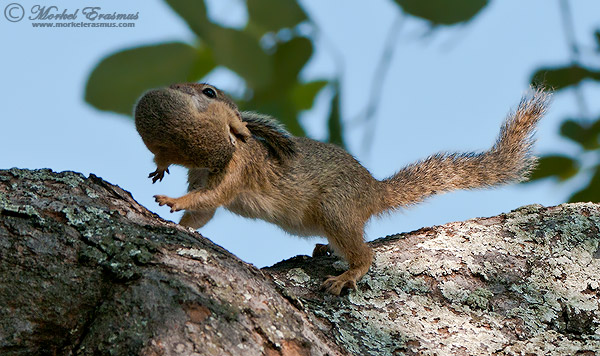 We stopped for a leg-stretch at a lovely viewing point...

As we headed back to camp slowly along the Red Rocks loop, we saw this cute little Terrapin...

However, the highlight of the drive was this big Elephant bull, wallowing in the late morning sun like a fat piggy!

We got back to Shingwedzi and proceeded to have a late brunch and a well-deserved early afternoon nap (after getting up at 04h00 every morning!).

Posted by Morkel Erasmus at 23:24 No comments:

Well, now...I've just about let my trip reports fall by the wayside.
Let's carry on with this one, shall we?

The last time, we left off HERE.

On the morning of our 2nd full day in the Park, we headed out bright and early. In the summer months, you can exit the camp gates at 04h30, and it effectively gets light around 05h00, with sunrise occuring somewhere between 05h20 and 05h30.

As we cruised gently down the Shingwedzi river road, we saw the local baboon troop waking up...

A few meters on we found the same family of Southern Ground Hornbills...in the trees!

Still, not a few meters from there we found a couple of big buffalo bulls, with the usual cattle egret acting as bodyguard.

As we reached the main road running between Mopani, Shingwedzi and the far north, we turned south and spotted a young Spotted Hyena strutting along the bush. Someone in the camp had told us about a hyena den in this direction under the road in a drainage pipe. We presumed he was headed that way.

He was. We found some of the adults next to the road where the pipe is situated.

After sitting with them for a few minutes, they pushed off deep into the bush, so we turned around and headed north again, to see if we could spot where the hyenas had come from.

This shy bushbuck ewe came to greet us.

We crossed the Shingwedzi river bridge and found this little hyena lying in the road just across the bridge, all alone. We wondered if he/she was also part of the clan we saw at the drainage pipe...though it was at least 5km back.

He was quite lazy and just wanted to lie down. They probably had an eventful night.

We turned around (again). The original plan was to drive the Redrocks loop that morning, and we proceeded there. En route we saw a couple of Saddle-billed Storks in a tree. These birds are now endangered so it's always good to spot them.

The impalas had dropped their lambs in the late spring so there were plenty of little ones around - like this cutie! Summer is a great time for birding in Kruger. This is a Green Wood Hoopoe.

And this is a Whitefronted Bee-eater. Backlit and using rimlight to add mood to the shot.

I think I'll end this episode here...in the next one you will see interesting behaviour from an elusive and rarely seen antelope...!