Right, let's continue with this trip report, shall we? We're picking up from the last episode, where we finished our morning drive from Twee Rivieren on our first full day.

The heat in the middle of the day in the Kalahari is searing, so we went back for some siesta time (although our tent didn't provide much solace, but the swimming pool was nice). On our afternoon drive we didn't see much, but this Meerkat (Suricate) was quite cute.

As we headed back over the dunes, we came across a herd of Gemsbok (Oryx) in a wonderful setting. You will notice that I use one of these images as the page banner of the blog.

We moved on, and took some more sunset photos...

We had a great braai that evening, and got up VERY early the next morning to pack up the camp and move on. We were headed to the Kalahari Tented Camp for 2 nights, which meant we would stay in tent-chalets and not have to set up camp again.

The sunrise was moody...

On the dune road to reach the Auob river we came across a female and male Northern Black Korhaan. As with most birds, the male specimen is the colourful one.

The light that morning on the clouds was magical. I call this the "Aurora Kalaharealis"...

Another antelope (gazelle actually) that is very common in the Kalahari is the Springbok.

We decided to take the long route to the Kalahari Tented Camp. The camp is situated just south of the larger Mata-Mata rest camp, and we decided to head over the lower dune road to explore a bit of the Nossob riverbed, before heading back over the upper dune road and towards our destination.

Gemsbok were running around in the dunes.

This region is also home to a variety of canids...the Black-backed Jackal, the Cape Fox and the Bat-eared Fox. We found some jackals in the dunes as well.

When we reached the Nossob riverbed, all was quiet, except for some Secretary Birds walking around looking for a late breakfast.

These iconic and odd-looking raptors are under threat in Southern Africa as their numbers are declining. Current studies are underway to determine the root causes.

We reached the upper dune road after a bumpy ride over corrugated roads without much in the way of good sightings. Our afternoon was about to get much better, but more on that later! First off, we encountered a breeding pair of Greater Kestrels in a tree along the upper dune road.

What's more...they had lunch with them...

That's the end of this episode, folks. Stay tuned for an amazing cheetah sighting and a surprise encounter with a rare feline...

As I stated in my previous post, I will start updating my blog with some trip reports, back-dating to about middle 2009 to try and give you a better sense of my travels and the development of my photography over the years. As these trip reports become current, I will try and also keep up to date after recent ones. This will also force me to process the masses of images still lying on my hard drives.

We had planned a week-long trip (8 nights) to this iconic park as a way to get re-acquainted with the place. I had last been here in 1995 as a lad in 7th Grade (with my folks). Back then we had promised as a family to return every year...but we never did. This time, with me having my own family I decided to honour that tradition. I can also duly say that after this initial comeback trip, have stuck to the tradition of returning at least once per annum, as this amazing place surely warrants it.

I won't go into too much detail, but will try to give you some idea of the better sightings we had, as well as some impressions of the Park and its facilities. Where I may have encountered a challenging photographic situation, I will share some of my thoughts behind the choices I made and settings I used. Kapeesh? Also take note that many of these images were edited/processed way before I knew anything about proper image preparation - and to be quite frank I don't have the time to re-process everything...

First off, this trip was a planning and packing nightmare. We were 2 couples, had to bring all our food and also all our camping equipment as a good part of the trip would be spent camping. This is how we had to pack my Nissan X-trail that I was driving at the time. Any other packing configuration, with one item not in its place, resulted in something left on the ground with no space to put it!

We started off our Kalahari trip like most visitors here do, by staying over in the main entrance camp, called Twee Rivieren. Here we had to set up camp, which luckily went quickly with everybody pitching in.

Our first afternoon's drive didn't deliver anything exciting, but I found this Whistling Rat quite cute.

Sunset was a blinder this evening!

The next morning, we made sure were out of the gates at first light. The dawn awaited us...with some springbok gazelle grazing on the ridges of the dunes.

We hadn't gone 1km from the camp, when we spotted movement next to the road. Cheetah!!
Over the next couple of years I would develop a very special relationship with the Cheetahs of this semi-desert. Amazing sightings are still to come in this report and those reports I still need to do! Watch this space...

It was a lone male, walking purposefully, no doubt in search of an early morning meal.

He crossed the road and smelled the nearest tree trunk where another Cheetah had probably left a scent-marking the previous day. The sun wasn't even up yet, and the Kalahari had delivered!

Twee Rivieren is directly translated as "Two Rivers", with good reason. Most of the driving roads in the Kgalagadi are set within the arid riverbeds of the Auob and Nossob rivers. Shortly after leaving Twee Rivieren you are faced with a decision - either go north towards Mata-Mata and the Namibian border in the Auob river, or go Northeast towards the Botswanan side in the Nossob river. On this morning we were forced to take the Auob as a large section of the road between Twee Rivieren and Nossob was under re-construction. We soon came upon a large herd of Springbok gazelle going about their business. This business included males play-fighting and the young fawns running up-and-down the riverbed. It was great fun to watch.

I also ticked off my first sighting of Pygmy Falcon here. This is Africa's smallest raptor.

Blue Wildebeest are very common in this part of the world. This herd was coming down from the dunes into the Auob riverbed to slake their thirst.

The old name for this Park (for the South African section) was the Kalahari Gemsbok National Park. Gemsbok is a southern African term for our local genus of Oryx. Needless to say there are quite a few of them in the Park. Gemsbok/Oryx actually don't need standing water to survive here. They get enough of their moisture from the dew in the mornings and they also have an internal cooling system whereby they can regulate their body temperatures by altering their breathing.

These 2 were having a tiff. With their rapier-shaped horns, it's no wonder that they can provide a deadly blow to predators who threaten them.

Posted by Morkel Erasmus at 00:10 No comments:

I've decided to pull my finger out of my ear and start using this blog for a good use - longer posts. I share many images on Facebook, Google+ and various nature photography forums every week, and everyone has a fair bit of text accompanying it, mostly about the story behind the shot and the technical settings I used, etc.

So here's the idea. I will start catching up on the trips I've been on since I picked up a DSLR camera for the first time in 2009. It might take a while, but some of them will be easy to catch up on since I already processed the images and have some text in the waiting from my Sanparks trip reports.

I will start off with our first trip to the Kgalagadi Transfrontier Park back in September 2009...so watch this space! 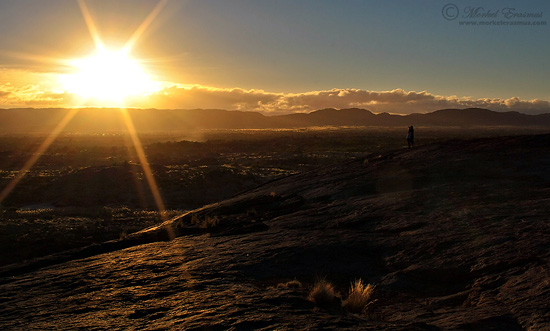 Hi everyone. Here's another addition to my new African Visions series of wildlife in monochrome and duotone.


A beautiful young leopard pauses and sits poised like only this graceful cat can. I think I have one of the poorest (read: least amount of photos) leopard portfolios of all the wildlife photographers I know. I just have bad luck with them! Aside from that one epic sighting in Kruger last year of the leopard scaling the tree, my other leopard sightings leave much to be desired. They avoid me in the Kalahari. They avoided me shockingly in Savute last year. And they even avoided me in the Sabi Sands earlier this year. This was taken in 2010 when leopards still liked me, LOL.

Monochrome conversions are very personal and subjective. Contrary to popular belief, merely converting to black-and-white won't "save" a photo. I often shoot with monochrome in mind - trying to look for contrasts and textures to use. Getting a monochrome conversion just right often takes me longer than processing a normal "colour" photo.

Have a great weekend, folks! I hope to meet some of you over the weekend at the Photo & Film Expo in Johannesburg, South Africa. Come and check out the Wild Eye stall (#339). 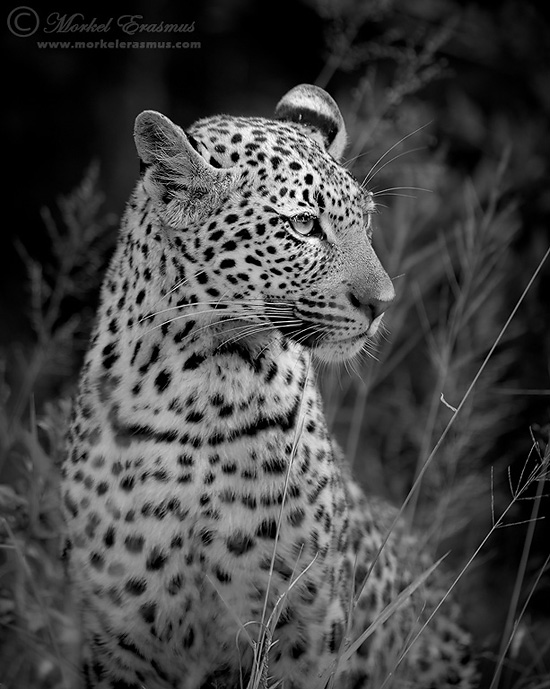 You may share this image as presented here under the Creative Commons Attribution-NonCommercial-NoDerivs 3.0 licence (CC BY-NC-ND 3.0)

Here's another addition to my new African Visions mono-and-duotone series of wildlife. This lion cub was photographed in Savute, Botswana.

Have a great week, folks!